Terrestrial flatworms, planarians of the family Geoplanidae, are rather secretive animals that live in humid zones like leaf-litter, under logs and rocks, and in burrows in moist soil.  They prowl on the surface on humid evenings.  They are predators on small, usually soft-bodied invertebrates, and they produce copious amounts of slime to protect themselves from desiccation. 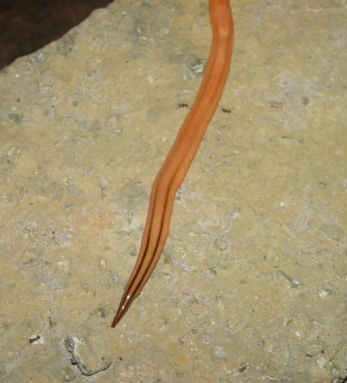 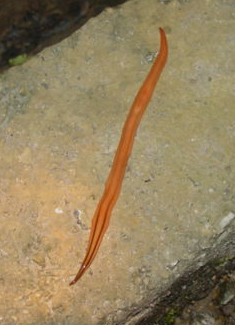 According to Dr. Peter Ducey, State University of New York-Cortland, the above species is probably Gigantea gigantea (formerly in the genus Geoplana).  The reason this identification is qualified is that the only way to be sure of the species in this group is to either use internal anatomical characters or DNA.  In the absence of these, we are going with G. gigantea.

It was originally described in 1899, and the type specimen was from Trinidad. They are not terribly rare at Asa Wright Nature Centre, but they are only occasionally encountered by infrequent visitors.