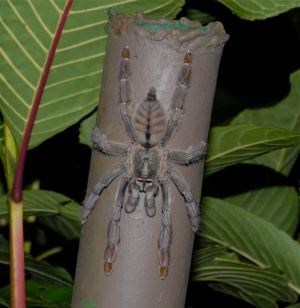 Many Neotropical and Nearctic tarantulas defend themselves by releasing urticating bristles into the air around them when threatened by a potential predator. The hairs are barbed and contain an irritating toxin that, especially when inhaled or entering the eyes, takes the predator’s mind off the spider.

The Trinidad Chevron Tarantula, Psalmopoeus cambridgei, a species endemic to Trinidad that gets rather large and is quite common in the rainforests of Trinidad, being especially abundant at our favorite site, the Asa Wright Nature Centre in the Arima Valley. They are naturally tree dwellers, but have adapted to human structures such as openings in hand rails, hollow sign posts, and the edges of roof margins.

Trinidad Chevrons do not exhibit the behavior of releasing urticating bristles, so how do they defend themselves?

And what do chili peppers have to do with tarantulas? Every country in the world claims to have the hottest version of peppers. Today, the hottest are in a group including the ghost and scorpion peppers. To give you context for how hot they are for the consumer, we can compare the level of Scoville Units (the scale with which we rate and compare their heat, or pungency) of a jalapeño (2500-8000 Scoville Units) vs. the ghost/scorpion/Carolina reaper clan (2 million Scoville Units)! We have to wonder why on earth people would subject themselves to this pain!!!

Most tropical naturalists have experienced the pain associated with the capsaicin toxins in peppers. They tend to burn – sometimes severely. Humans and other animals have specialized capsaicin receptors that, when stimulated, send sensations of burning to the brain – a very uncomfortable sensation to say the least.

Their research primarily focused on the venom of the Trinidad Chevron tarantula.

Chevrons are said to be very aggressive, more so than other tarantulas, and move very quickly when disturbed. Some say they are prone to bite and should not be handled. This would be an obvious adaptive strategy of co-opting capsaicin signaling pathways by their venom.

Although we have not experienced this aggressive nature, Julius’ research will make us a bit more cautious when interacting with Trinidad Chevrons.