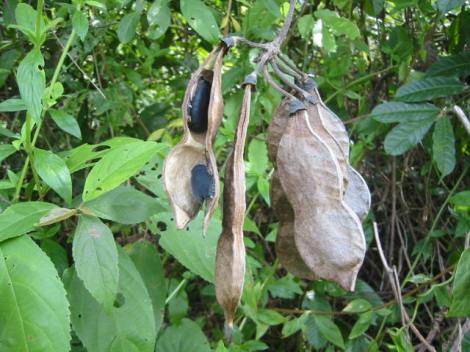 First known to us as “lucky beans,” so called by the Maya in San Miguel, these beans bring luck to those who carry them in their pockets or back packs (yes, present in all of ours).  They are Mucuna holtoni (formerly M. argyrophylla).

These vines are pollinated by bats.  Interestingly, bats are able to tell which flowers have been visited by other bats, thus probably don’t have any nectar left, after the pollinating bat reconfigures the flower in a way that the next visiting bat detects the change with its echolocation.  As in other bat pollinated vines, the flowers of this species hang down on long aerial scapes that makes them easily available to the hovering bats.