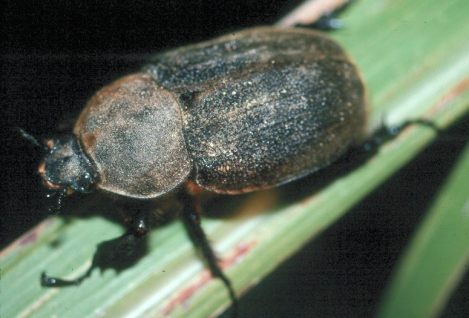 Photo by Bob Thomas, taken in the Arima Valley, Trinidad, May 1995.

Photo by Bob Thomas, taken in the Arima Valley, Trinidad.

The hercules beetle is one of the largest beetles in the Neotropics.  Males have two forward directed horns that create what are called pliers.  Further, there are two forms of males, major (with very long pliers) and minor (with short pliers).

Pliers are important when males are sparing for mates.  They do battle, and the victor wins the spoils.  Unless, that is, the warriors are so distracted by the battle that a minor male sneaks in and deposits its genes!

When handling these beetles, be careful where you place your fingers.  You can get a painful squeeze!