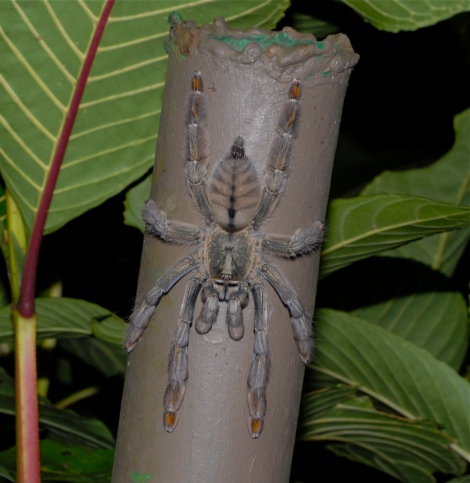 If you look very carefully just to the right of the rear leg viewed here to the upper left, you will see a very small pseudoscorpion – an example of the “extras” often seen in the tropics for those who look closely!  Photo by Shannon Fortenberry, Asa Wright Nature Center, Trinidad, November 2009. 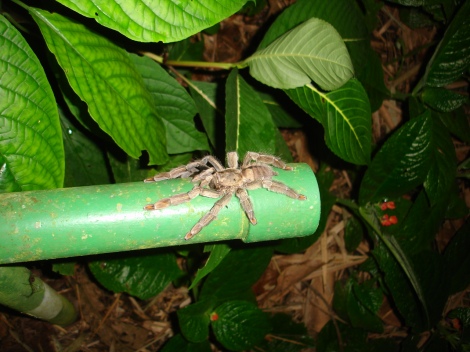 Trinidad Chevron Tarantulas, Psalmopoeus cambridgei, are endemic to Trinidad and are common in the rain forests of higher elevations and nearby areas.  They prefer trees, and construct their living quarters in holes and cracks.  They also love open pipes on handrails and signs, so one has to watch where hands go in the dark.  Luckily, our experience is that they are not aggressive (be sure to see the separate piece on their venom for another opinion).  Their size, 4 inches or so body length, makes many humans uneasy.

The photos above were all taken at the Asa Wright Nature Centre in Trinidad.  Over the years, we’ve seen a number of Trinidad Chevrons “size out” of the green pipe.

We don’t know the behavioral function of the iridescent blue coloration on the forelegs as seen in the lowest photo.  It is rarely noticeable to humans.