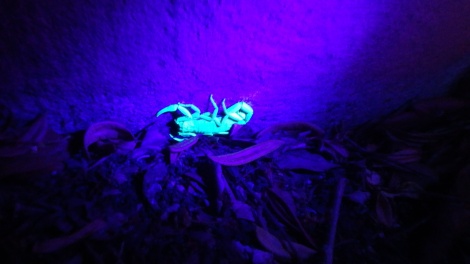 How very brave people catch live scorpions by closing their fingers on each side of the stinger!  Half Moon Caye, Lighthouse Reef Atoll, Belize, May 2006. Photo by Bob Thomas,

Scorpions are very interesting arachnids that are secretive, nocturnal, and have a painful sting.

They fluoresce in ultraviolet light, and experts search for them using UV light.   University of Oklahoma scientist Douglas Gaffin found that scorpions detect ultraviolet light over most of their body, and may use that sensation to know, for example, when they are safe under a shelter if the UV light is diminished.  Certainly more study will reveal additional uses of their being able to “see” with ultraviolet light.

One of the photos above shows former student Jessica Forrester demonstrating the proper way to capture a live scorpion (yes, it takes lots of nerve).

All scorpions do sting, but few are deadly, and the species in Central America are usually not a threat to life.

Scorpions typically feed on other invertebrates, which they grab with their pedipalps, the claws that remind one of a crab or crawfish.  Once subdued, the prey is injected with venom by the stinger on the tip of the tail.

Each species has a different toxic mixture in its venom, and those studied show that the scorpion has a clear, thin component and a milky, viscous component.

Under normal circumstances, a sting initially injects the clear venom.  This so-called prevenom is deadly to invertebrates, the critter’s normal prey, and consists mostly of potassium (about 16 times that of the cloudy venom).  In mammals, prevenom produces a severe burning sting that is very painful.

If the scorpion stings again, it typically injects the viscous venom, which can be quite dangerous to mammals.  It consists mostly of proteins (six times as much as in prevenom) and other chemicals, and is five times as harmful to mammals.  It is the lethal component in the potentially deadly species, and in the typically non-lethal species, it produces painful symptoms that extend beyond the initial sting, persisting for hours or days.

The adaptive significance of this venom system is cleaver.  The primary purpose of the venom is to obtain food.  A small amount of the clear venom efficiently accomplishes that task.  It also causes such a bad sting in mammals that a protective strike is likely to make the predator focus on something other than biting the scorpion, especially since the sting is likely to be on the face.

If the predator persists, the next injection carries a larger wallop and, depending on the species, can cause a regrettable circumstance.

Having been stung a few times over the years, we can tell you that we never continued to pursue the scorpion.